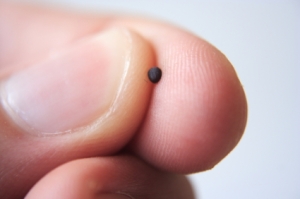 31 He told them another parable: “The kingdom of heaven is like a mustard seed, which a man took and planted in his field. 32 Though it is the smallest of all seeds, yet when it grows, it is the largest of garden plants and becomes a tree, so that the birds come and perch in its branches.” Matthew 13:31-32

The mustard seed is tiny – about the size of the head of pin!  It was the smallest seed used at the time and those listening to Jesus would have been able to immediately identify with the parable.

The parable describes how the seed grows into a large tree that provides shelter for birds and wildlife.Once planted it grows into a large shrub-like tree that can grow to over 15 feet tall! It provides a habitat for a huge number of birds, animals and insects.
What can we learn from these parables, and why did Jesus chose these things to illustrate what the kingdom of God is like?

The main point of this parable is to show that the kingdom starts small and grows into something great. We are going to explore what the parables meant to the first hearers, but also what they means for us now.

Let’s look at the stages of growth of the Kingdom of God:

It would have been a surprise for Jesus’ listeners to hear him compare the Kingdom to something as small as mustard seed and yeast. They would have expected something huge and powerful, – maybe an oak tree, or a mountain, or a mighty river, or thunder and lightning!

Many expected the messiah to bring the kingdom in a blaze of glory – fanfares and trumpets, and victory over the oppressive force of the Romans, and anyone else that stood in the way. God had different ideas and he sent Jesus to earth as a saviour that no-one expected.

Let’s have a quick look at Jesus’ background because his life sets the pattern for the growth of the kingdom:

– Jesus was born in the tiny town of Bethlehem in poverty.

– He was raised in Galilee, and no one believed that a man of God could come from there, John 7:52.

– He was raised in Nazareth. The inhabitants of that city were considered to be wicked and worldly by the Jews.

– He had no family connections. He had no money. He had no support from the religious leaders of the day.

– Jesus was considered to be a nobody from nowhere, who would amount to nothing!

– His parentage was questioned, John 8:41 by His enemies.

– His followers were the ordinary people of society

– His Own people rejected Him.

– He was despised and rejected by men.

– The Romans eventually nailed Him to a cross and buried Him in a tomb.

– His followers preached His resurrection, but most people ignored their message and considered them fools for following a dead man.

– Even the Lord’s message was hard to swallow. For some it still is because it goes against our human nature .Jesus said to get to give away what you have. He told people to love their enemies. He counselled men to turn the other cheek. He spoke of walking the second mile.
Jesus arrived on earth in very insignificant and ordinary circumstances. He was the mustard seed that God “planted” on earth, and it was from this humble beginning that the Kingdom of God was founded. He completely shattered the expectation of what the messiah was going to be.

God introduced his Kingdom to the world in the smallest, most humble manner imaginable! But that is how he operates. He uses the small, humble, vulnerable and weak to achieve things for his glory.

– MOSES was called by God out of obscurity to challenge Pharaoh and secure release of the Israelites from oppression. Moses himself said “who am I? I am slow of speech. Send someone else!”

– GIDEON was from the smallest family in the smallest tribe of Israel, yet God raised him up to be a great military leader

– JOSEPH was despised by his brothers and sold into slavery to the Egyptians. God rescued him from prison and lead to him a position as a senior official in Government.
– DAVID was the youngest of 8 sons. He was given the job of shepherd boy that no-one else wanted left out in the fields tending sheep. God turned him to a giant killing King!
God uses the small and insignificant
Much like the society of Jesus’ time, our world celebrates the biggest, the best, the rich powerful and successful. You may feel insignificant and small compared to the rest of the world and it can seem like a daunting task to step out into the world and spread the Gospel.

Maybe you’re suffering with a physical or mental illness, or you’re struggling financially, or you have family problems that seem insurmountable. Maybe you feel like Moses when it comes to sharing your faith “send someone else”!

Perhaps your church holds back because you are small, you don’t have huge resources; Maybe you feel insignificant and ineffectual surrounded by a culture that is not really interested in knowing God.

None of these things are a hindrance to God!

God uses the small, weak, and unnoticed to achieve great things for his Kingdom. God uses people like people like you and me.

He wants us to be Kingdom builders and not to hide away because we think we are too small or weak to achieve anything. We follow an almighty God and King of all things and he can do anything through us!

Take encouragement from that and have faith that he will work through you! He is using us to spread his Gospel.

We are called to do our part by planting the seed, being faithful in the small things, and obedient God. When we give our small offering, God will use it for his glory and building his kingdom. That is how God works!

1 Corinthians 1:25-31outlines this quite clearly….
26 Brothers and sisters, think of what you were when you were called. Not many of you were wise by human standards; not many were influential; not many were of noble birth.

30 It is because of him that you are in Christ Jesus, who has become for us wisdom from God—that is, our righteousness, holiness and redemption.

31 Therefore, as it is written: “Let the one who boasts boast in the Lord.”[

THE KINGDOM GROWS AND BLESSES

Jesus started his ministry with 12 followers – not the top religious leaders of the day, but the ordinary people of society and in some cases the despised of society.

Jesus invested in his disciples. He taught and guided them and told them about the Kingdom of God, so that they could tell others and spread the gospel.

His death was not the end! Like the seed that has to be buried to grow, so Jesus was buried, but from the ground he rose to establish his Kingdom on earth.

By the time Jesus had returned to heaven there were around 120 devoted followers. From this point the Kingdom expanded, with 2000 coming to faith at Pentecost, and another 5000 not long afterwards.

Since then everywhere the seed has been planted those the Kingdom has spread as people come to know Jesus and give their lives to his service.

The planted mustard seed and the yeast added to the dough have an inevitable consequence. The tree will grow! The Kingdom of God has a certain and inevitable end, where the growth will spread, the kingdom will be established and Jesus will return.

Every person that has been saved by Jesus and brought into the Kingdom can testify how god has blessed them. Everywhere the Gospel has germinated, compassion, decency and morality have sprung up. Truth and salvation have been proclaimed and lives have been changed.

Jesus didn’t just talk about the Kingdom, he demonstrated it. He healed the sick, cared for the poor, the widow, the lost and hurting. He built his kingdom by reaching one person at a time, meeting their needs and offering them salvation.

The spread of the Gospel has built orphanages for the fatherless and homes for the homeless. The Gospel has reached out to comfort the bereaved, care for the sick.

The Gospel has changed individuals, communities and nations.

Our country owes its existence and blessings to the spread of the Gospel of grace. This nation was founded on the principles of the Gospel and the Christian faith and even those who reject the Gospel in the UK today still reap the benefits of a nation founded by God and for God.

Patience and perseverance
It is important to realise that the mustard tree does not grow overnight It takes years to transform from a tiny seed to a huge tree.

Being a follower of Christ takes patience and perseverance and we may not even see the result of our efforts and blessing of the Kingdom of God in our lifetime. However, we are still called to sow the seed and work towards building the Kingdom.

I think particularly in this day and age when life is so fast-paced and instant, it is difficult for us to be patient and wait for things. I find myself getting irritated if my computer or phone doesn’t load up in less than a nanosecond! We expect everything to happen NOW!

You may be plugging away at trying to witness to your friends and family who do not know Christ and at the point where you think that it is a fruitless task.

You may have been working either full time or in your spare time in a particular area of ministry and be ready to throw in the towel, because you can’t’ see any change.

Perhaps you are waiting for the fulfilment of something that God put on your heart years ago and it has yet to happen. God doesn’t operate on our timescale and so often through the bible he makes people wait and instructs us to “be patient and wait on him”. I’m not saying it’s easy, but it is well worth it and he is always faithful.

Hudson Taylor was a missionary in the late 19th Century to China. He worked and poured his life into brining the gospel to China and spreading God’s kingdom there, but he saw little blessing for a long time.

He persevered for 50 years, though illness, loss of his wife, opposition from other church leaders and all manner of difficulties.

When he died in 1905 there were over 800 missionaries in China and 125,000 Christians. It has only been in recent times that Christianity has exploded in China, as a result of the groundwork that Hudson Taylor did over a century ago.

It took Jesus 30 years on earth before he started his ministry. You’d think God might have used a quicker method of delivering his message, but he doesn’t work like that, as we’ve seen.

If you feel that you are getting nowhere with your hard work in spreading the gospel, don’t be discouraged. God has a plan to build his Kingdom and it will not fail! Keep going, because you don’t know when the breakthrough might come. Keep watering the seed in the ground because growth will come!

What does this mean for me?

This means demonstrating the Kingdom of God to people in our own situations, just as Jesus did. God gives us each a work to do, and for each one it will be different.

Every interaction, every conversation is an opportunity to build the Kingdom. We don’t have to do the spectacular, we just have to persevere and be patient and do the small things that God has given us to do. He will do the rest.